Syrian refugees in Tucson hopeful during time of uncertainity

Under an executive order signed by President Donald Trump, Syrian refugees have been banned from entering the U.S. indefinitely.

TUCSON (KGUN9-TV) -- Under an executive order signed by President Donald Trump, Syrian refugees have been indefinitely banned from entering the U.S.

For Syrian refugees already living in the U.S., it's unclear when they'll be able to see family members who are still going through the vetting process.

KGUN9 spoke to two Syrian refugees who have been living in Tucson between 3 and 6 months. While they wanted to keep their identities private, they did want to share their stories. The images of unrest and turmoil many of us see on TV was their home they had to escape.

The woman says she has had 10 family members go missing, never to be found again.

Another 34-year-old refugee says at one point she thought she would never make it out of Syria alive. Her home was bombed and destroyed in 2011.

"We fled to Damascus. I gave birth and then we fled to a school until I filed for a passport," she said. "We struggled a lot. There was no electricity, there was no water."

The women still have family that are living overseas going through the vetting process, and now with President Trump's executive order they are unsure when they will see them again.

The 34-year-old woman said when she found out about the order she was overcome with emotion, and she broke down and cried. It took her two years to go through the vetting process while staying in Jordan, and it was often months until she found out about her next interview.

President Trump says the executive action was all in the name of national security, and supporters applauded his efforts.

"The whole point here is that we need to do a better job vetting, both on the Visa application process, but also on the refugee program as to who we're letting into the United States responsibly and who we're not," said Rep. Michael McCaul of Texas.

However, opponents say the vetting process is already through.

In Tucson there are multiple agencies that help resettle refugees, including Refugee Focus. It is a part of Lutheran Social Services of the Southwest. It released a statement just before President Trump signed the executive order. 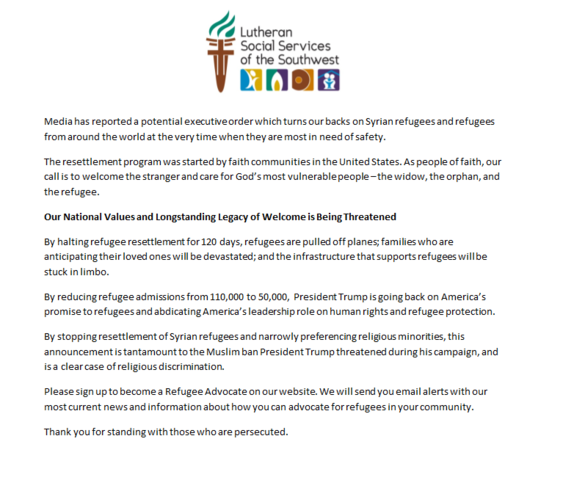 According to the U.S. Department of State, refugees are screened more carefully than any other type of traveler to the United States. Since 1975 the U.S. has resettled more than 3 million refugees.

Statistics from the Arizona Department of Economic Security show in 2016 more than 714 Syrian refugees were resettled in the state.

The current vetting process in the U.S. includes multiple background checks, fingerprint screenings and in-person interviews. Syrian refugees are subject to additional checks, and experts say it takes between 18 months and two years to be approved to enter the U.S.

The Syrian women KGUN9 met with say they love cooking and baking, especially dishes from Syria. Dozens of refugee families in Tucson were involved in the Syrian Sweets bake sale, which organizers say was hugely successful. Some of the women hope to turn it into a regular business so they can be self-sufficient.

Melanie Cooley, a Tucson woman, is not formally involved with any resettlement agencies but she has been involved in the refugee community. She is one of more than 1,500 members of a Facebook page called Arizona Welcomes Refugees. The group is not a formal agency, but works to assist and welcome refugees to Arizona.

As someone who enjoys to surround herself to different cultures, Cooley says she knows that the policies of President Trump have a real human impact. Cooley understands that Americans want to protect the people they love, but the U.S. cannot isolate itself from the world.

The 46-year-old refugee woman  says despite what's going on in the political world, she remains hopeful and optimist about the future. Everyone in Arizona has been very welcoming, and she hopes she can soon welcome the rest of her family.

"(America is) exactly like I imagined it, I love the country and I love the people, the way they treat us," she said.