From Cardiac arrest, to a photo finish

Five years ago, at 67 years old, Gary Brauchla's life was turned upside down. One night, after going to sleep, his wife Kathie said he was snoring really loudly.

Five years ago, at 67 years old, Gary Brauchla's life was turned upside down. One night, after going to sleep, his wife Kathie said he was snoring really loudly.

Gary had suffered Cardiac arrest. His heart had stopped, and no blood was flowing to his brain.

"What she thought was me snoring was actually my last gasp," he said. "And I was dead."

Right when she realized something wasn't right, Kathie began performing Continuous Chest Compression CPR on Gary -- for nearly 6 minutes, until the paramedics showed up. He says she's the reason he's still alive today.

"I knew what I was doing wasn't perfect," she said. "It doesn't have to be perfect. But it worked."

"Five years ago, I should have been dead," Gary said. "We should have had services for me and everything else, so I just got in my mind that I want to do everything I can do and enjoy it."

Dr. Lou Lancero at the Tucson Medical Center is an interventional cardiologist. He explained that the survival rate in Gary's situation is typically less than 10%, and the people that do survive often have brain damage.

"With no blood flow, the heart stops, brain function goes down," Dr. Lancero said. "It's a remarkable outcome."

After a successful treatment, when Gary woke up, he realized he wanted to make the most of his time on Earth. He thought to himself, what is something I've never done before? So, he began training for his first 5K run. Less than a year later, he raced in his first one, at 68 years old. 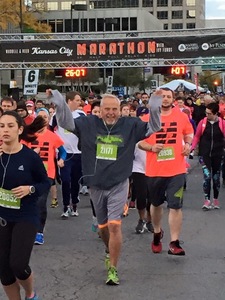 "8 months after I died, I actually ran it. I did it," he said. "It's probably the biggest accomplishment I've ever did, it's because I had actually finished that race. Like I said, I didn't win, I was middle of the pack and I've been in the middle of the pack ever since, but I finished it. I finish that race all the time."

Since then, he's ran in 18 more races. He aims to run four miles ever other day to stay in shape, and he says he doesn't plan on stopping anytime soon.

Along with running, he does something else that brings him great joy: he teaches CPR classes.

"What he's doing really matters a lot," Dr. Lancero said. "That is making a community, making people around him aware."

"Just a little bit of education can teach people how to save somebody's life," Gary said. "That's the most important thing, giving it back to people, because I was blessed by still being here."