While the bite itself isn't big, its created an expensive and painful problem for Jack Taylor.

"He didn't get a very good bite, it didn't puncture too deep," Taylor said. "But you never know, the next person might not be as lucky."

Dog bites man in Rillito River Park — he’s hoping the owner comes forward to tell him if he needs to continue getting Rabies shots. He says they’re expensive & painful. So far, he’s had 10. Due for two more rounds. Story at 5 @kgun9 pic.twitter.com/0qe9pWNJa2

The bite is mostly healed up since it happened last Monday. Taylor says he was walking the Loop at Rillito River Park near Ft. Lowell and Alvernon when a dog jumped out of the bushes, bit his arm, and then ran off to its owner, who he says ran away. He thinks the dog was a German Shepherd.

Park rules state pets must be leashed and under control at all times. That wasn't the case on Monday night, according to Taylor.

"I did have to start my Rabies treatment because the owner took off," he said. "I couldn't verify if the dog has had it's Rabies shots."

That means, a lot of shots for Taylor, which he says are very painful and expensive.

"Nine shots, three right here [shoulder area], one in my arm, and then five in the butt," he said.

However, that was just on the first night. He had to get another shot on Thanksgiving, and he still needs to get two more. In total, he's looking at 12 shots.

Since then, he's posted about 100 flyers around the park, asking the owner of the dog to give him a call. Taylor wants to know if the dog has had it's Rabies shots or not, so he'll know whether or not he needs to continue his Rabies treatment. He's also hoping for some compensation for his medical treatment. 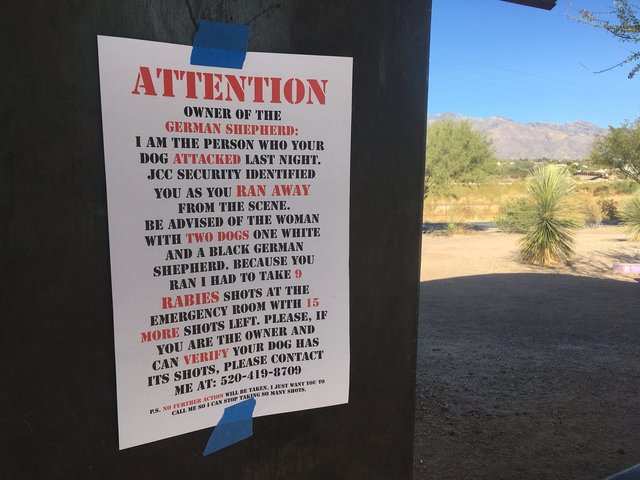 At the same time, he wants the people who come to the park to be aware that this dog may still be out there, and they need to be careful and extra aware.

"I just don't want anyone else to be bit like this," he said. "Luckily, I got off easy. But maybe the next person won't."

As for the rules, he'd also like people to remember to keep their dogs on leashes.

"Rules for respect and safety. Without them, we're going to have more incidents like this," he said. "Everyone needs to follow them and keep this place safe for everybody. No one's exempt from the rules, no one's above the rules."

Taylor did file a report with Animal Control. However, he says he doesn't plan on pressing charges against the owner.