Can smartphone use right before bed be harmful?

Everyone has their own bedtime ritual in place. However, checking on a smartphone or tablet, often is the last thing many people do before they shut their eyes for the night. Dr. Joseph Miller, head of the University of Arizona's Department of Opthamology says this is an increasingly common thing people do.

"Everybody seems to look at our phones at bedtime," Miller said. "A little constant feed update is irresistible. Way better than counting sheep."

KGUN9 ran a poll on Facebook asking the question: "Do you use your phone before bed?" While the results aren't scientific, they still proved to be pretty revealing. 175 of 214 respondents admitted they do it. 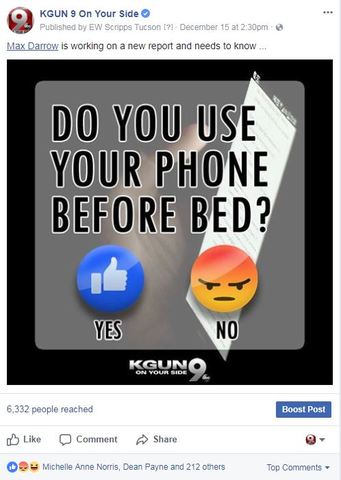 Dr. Miller explained while this habit may be enticing, it comes with some drawbacks. The first one has to do with straining your eyes.

"I think all of us have turned on our phones after we've adapted to the dark, and it's like, ow!" Miller said. "As far as I know, it doesn't cause permanent damage. But, it does hurt. And if it hurts, that's a warning sign."

His main concern isn't about eye strain, however. Rather, it's about sleep quality. The brain reacts differently when exposed to different kinds of light. The light coming off of a smartphone or tablet has a lot of blue in it. To the brain, this doesn't mean night time.

"It's daytime that we have blue light coming in our eyes. Our retinas actually sense this and send it to our Hypothalamus that says, time to wake up, blue light's out there," Miller said. "Our Diurnal rhythm, what makes us go to sleep and what makes us wake up, is triggered by the red light going into our retinas, and the blue light being stimulus to tamp down the fluctuations of melatonin production."

Melatonin is the hormone that regulates sleep and wakefulness. If there's less of it being produced, Miller explained the quality of sleep will take a hit.

"While you may sleep for the same period of time," he said. "You have less Melatonin production, and you sleep less well."

If you do plan on using your smartphone or tablet before going to sleep, Dr. Miller explained there is a way to do so that will decrease the strain on your eyes: turn the phone on "night shift," "night mode," "red mode," or whatever your device's version is named. By doing so, it switches the color to a red filter, which decreases the amount of blue light that your device emits.

But his best advice? Don't do it at all.

"Turn these things off an hour before bed, or switch to a red filter to keep the blue light out of your eyes," he said. "Turn it off when you want to be off."