Desperate family fights to get deposit back

Why the family says it could happen to anyone 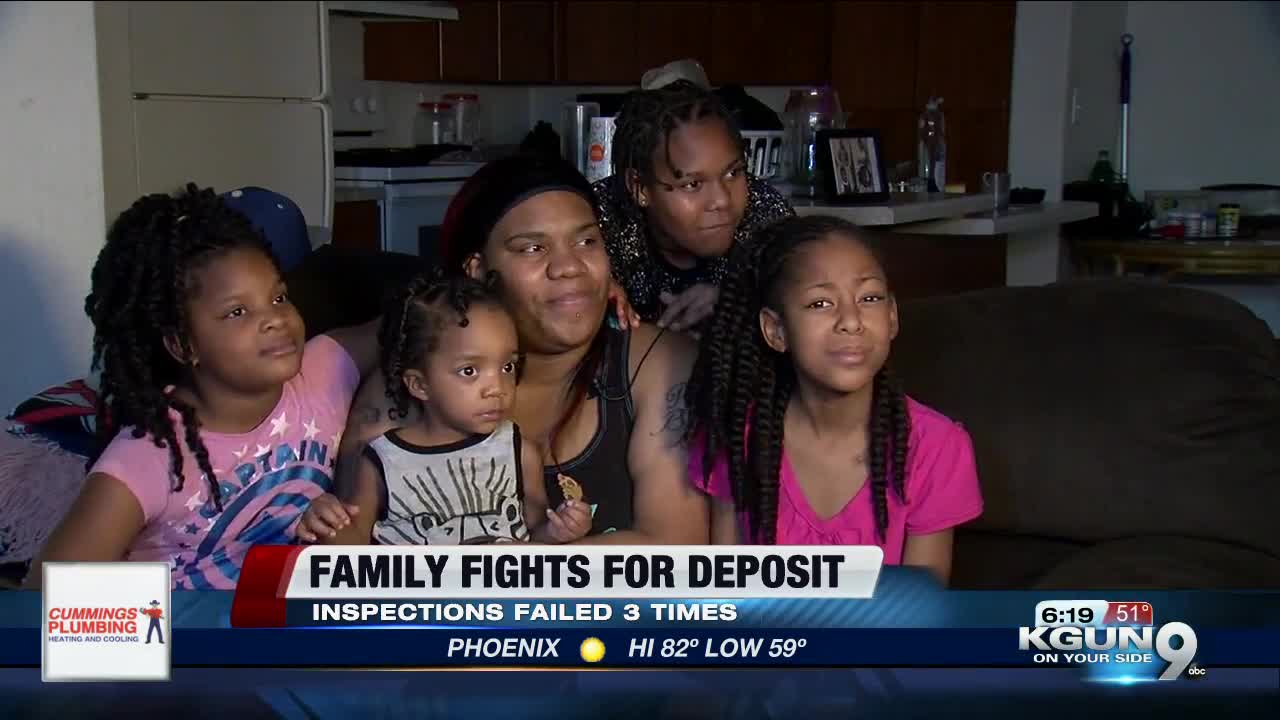 They came to the Valley wanting a better life for their family. But with jobs few, money scare and shelters full, they say they had no place to go.

They came to the Valley wanting a better life for their family.

But with jobs few, money scare and shelters full, they say they had no place to go.

Alicia Carter says she and her family of 6 lived in their car and bathed where they could.

Then finally they got some good news. The family qualified for Section 8 housing.

And they found a 2-bedroom place in Phoenix. It was owned by Bars LLC of California and Alicia dealt with Vadim Agamirzoyan.

The City of Phoenix Housing Department set up a required inspection through its Section 8 division.

Records show the inspector could not get access to the condo.

Their paperwork states no shows are considered a failed inspection. A second inspection was set and it too failed.

The inspector found a burner not working, gas off, a window lock issue and more.

When a third inspection deadline was set, Alicia says she had enough and needed a place immediately.

So she found another home, got another Section 8 voucher, and was able to move into this place.

Then she asked Agamirzoyan for her deposit back. She says it's all the money the family had.

Though her lease agreement says the security deposit is "refundable", the owner would not give anything back.

Agamirzoyan told us he was not notified of the inspections and would have been able to take care of the issues.

He says Alicia and her family "simply didn't allow the process to go thru and complete and that is why the deposit was held." "If the tenant decides to cancel the lease agreement due to her wish and not the ability to lease, the security deposit is held nonrefundable."

But Section 8's own regulations say if the unit fails inspection twice, as this one did, "the family will be required to select another unit," which they did.

So you might think Section 8 authorities could get that deposit back for the family.

Instead, we found a system that seems to leave tenants like the Carters vulnerable to exactly what happened here.

Through a series of emails, the City of Phoenix Housing/Section 8 division says "there is nothing we can do."

They called it a landlord/tenant issue.

They say "the owner, in this case, did not enter into a Housing Assistance Payment (HAP) contract with us for this tenant, so we have no leverage."

Banfield is a landlord/tenant attorney with Udall/Shumway.

He says that means a tenant can get into a lease, possibly pay a deposit demanded by a landlord and then the property is doesn't pass inspections.

And that's just what happened to the Carters.

Section 8 approved the family for a voucher, inspected and failed the condo they chose-twice, but didn't oversee the lease agreement.

The Housing Authority tells us "we do not request an executed lease from the landlord and tenant until after the unit has passed inspection. If it does not pass inspection, we cannot enter into a HAP contract, which means we do not even request a lease. If a tenant chose to pay a deposit to a landlord prior to the submission of a Request for Tenancy Approval and the unit passing inspection, that was not based on any instruction by the Housing Authority."

And the Housing Authority says they have "no authority to discipline the landlord for this practice."

So the Carters are left fighting to get their money back without any help.

But there has been some recent good news for the family.

If you're in a similar situation looking for Section 8 housing, Banfield says demand a condition in the lease saying no security deposit is required until the property is approved by Section 8.