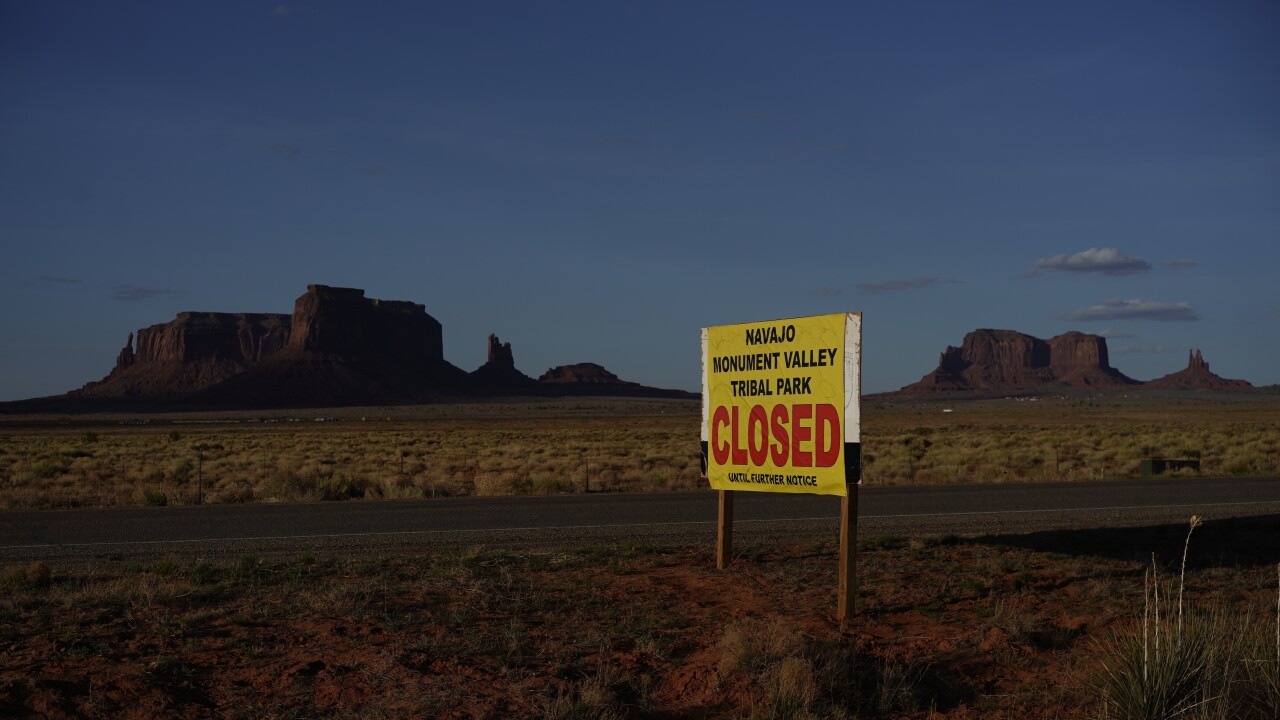 Copyright 2020 The Associated Press. All rights reserved
Carolyn Kaster/AP
This April 23, 2020 photo shows a sign posted in Oljato-Monument Valley, Utah, saying the Navajo Monument Vally Tribal Park is closed, in an effort to prevent the spread of COVID-19 on the Navajo reservation. The reservation has some of the highest rates of coronavirus in the country. (AP Photo/Carolyn Kaster)

World famous Navajo landmarks like Monument Valley remain off limits to tourists. They're shut down to help leaders gain the upper hand on the pandemic after at one point, having the highest COVID-19 infection rate in the entire U.S.

"We want everyone to be healthy and I don't want them to catch the virus," explains Navajo Nation President Jonathan Nez.

President Nez acknowledges it wasn't an easy decision and has created more pain for his people -- but it's pain he's hoping is only temporary.

PHOTOS: COVID-19 on the Navajo Nation

"We had to do some stringent policies by locking down our borders and doing curfews...It has been a challenge for many of our Navajo citizens. They cannot provide for their families like they used to."

Watch our in-depth look at the community's struggles in a special report Tuesday on ABC15 Mornings. We'll have special coverage all week in a series of on-location reports from the Navajo Nation.

It's the reality people like Lyden Russell are living. He works at a Chinese restaurant in Window Rock, where the owner says they're only seeing about a third of the customers they were seeing before the pandemic.

Russell's take-home pay has been cut in half, but he explains, he's at least happy to get that.

"We shut down for a month and a half," says Russell. "No income."

And as someone who's coming into contact with customers day in and day out, he knows there is a risk he could get the coronavirus.

"I think about it all the time as well as take precautions myself...It's a sacrifice you make for your family. Social distancing, wearing a mask, and just hoping every day someone doesn't give it to me."

"We were really caught off guard. We've been so sheltered," explains Nick Taylor, whose company manages 10 shopping centers on the Navajo Nation. He says nearly a third of their stores are struggling to pay the bills -- some may not even be able to re-open.

"It does become very overwhelming and emotional when you think about it. These are just people who are living their lives as best as they can. Its unfortunate all this occurred and disrupting quite a bit of families."

Taylor's family has been impacted as well. He recently lost his uncle to coronavirus, meaning he's had to step up and help his aunt get through this difficult time.

"There are those moments where you hit a low spot and it goes back to who you are as an individual and bring in the customs of being Navajo. We continue to march on and carry on and help other people through these tough times."

This is the second in a week-long series of special reports from the Navajo Nation. Join us on ABC15 Mornings all week to see our complete coverage.