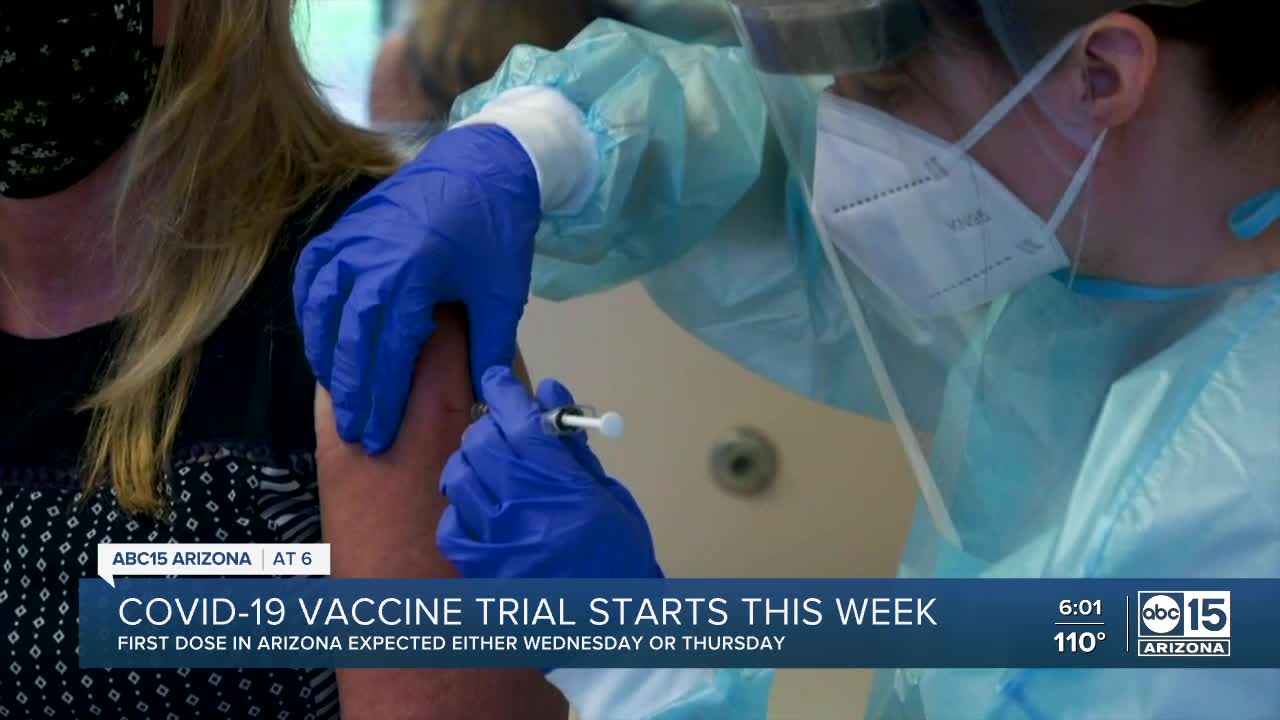 First dose in Arizona expected either Wednesday or Thursday.

A large study is now underway across the country to see if a COVID-19 vaccine works, with participants also being tapped from Arizona.

This particular candidate is from Moderna Inc. in partnership with the National Institutes of Health. The Phase 3 trial consists of 30,000 participants.

In Arizona, the Hope Research Institute is enrolling participants in the study. While no exact number, the institute told ABC15 several thousand Arizonans might partake. They are in the process of contacting people who have expressed interest and the first dose in Arizona is expected either Wednesday or Thursday.

"There's such a huge interest in this," said Dr. Nathan Alderson, CEO of the Hope Research Institute. "This is the most buzz by far we've ever received for a trial."

Dr. Alderson told ABC15 it's not too late to contact them and potentially take part.

"We do need more people that are higher risk," he said. "Such as healthcare workers, first responders, essential workers. We also want to place a heavy emphasis on enrollment in minority groups."

Dr. Alderson told ABC15 half of participants will receive the vaccine, while the other half receive a placebo. Other companies are also expected to initiate phase three trials of their vaccine candidates going forward.

"There [are] no guarantees in a vaccine study, even during phase three," Dr. Alderson said. "We need to take this one step at a time."

Dr. Alderson said the institute will be reaching out to people who have expressed interest in the coming days. One woman ABC15 talked to Monday said she is waiting for a call back and hopes to take part.

"I think the rewards outweigh the risk," said Ann Street.

Street told ABC15 she is over the age of 60 and with health concerns and temporarily left the Valley for Pinetop in order to try and escape the threat of the virus.

She wants to take part in the study both for research and potential benefit for her and her husband.

"Possibly I can get the vaccine a little sooner," she said. "My husband and I have some health issues and it would be good to get both of us protected."

Another woman, who is a neonatal nurse practitioner, is also hoping to hear back from the Hope Research Institute and would like to take part in the trial.

"I'm older, I'm 63, I'm in an at-risk population," said Kim Krueger, who lives in the West Valley. "I'm being exposed in the hospital everyday I work, so I think I'd be a good candidate for it."

Krueger also expressed the hope it perhaps puts her closer to being more protected from the virus.

"I'm super excited, I hope I get the real dose," Krueger said. "If not, I hope it proves to be successful and we can go forward with dosing everybody."

Dr. Alderson told ABC15 while early data will be submitted to the company and could play a role in potential approval of a vaccine in early 2021, patients in the study will participate for up to two years.