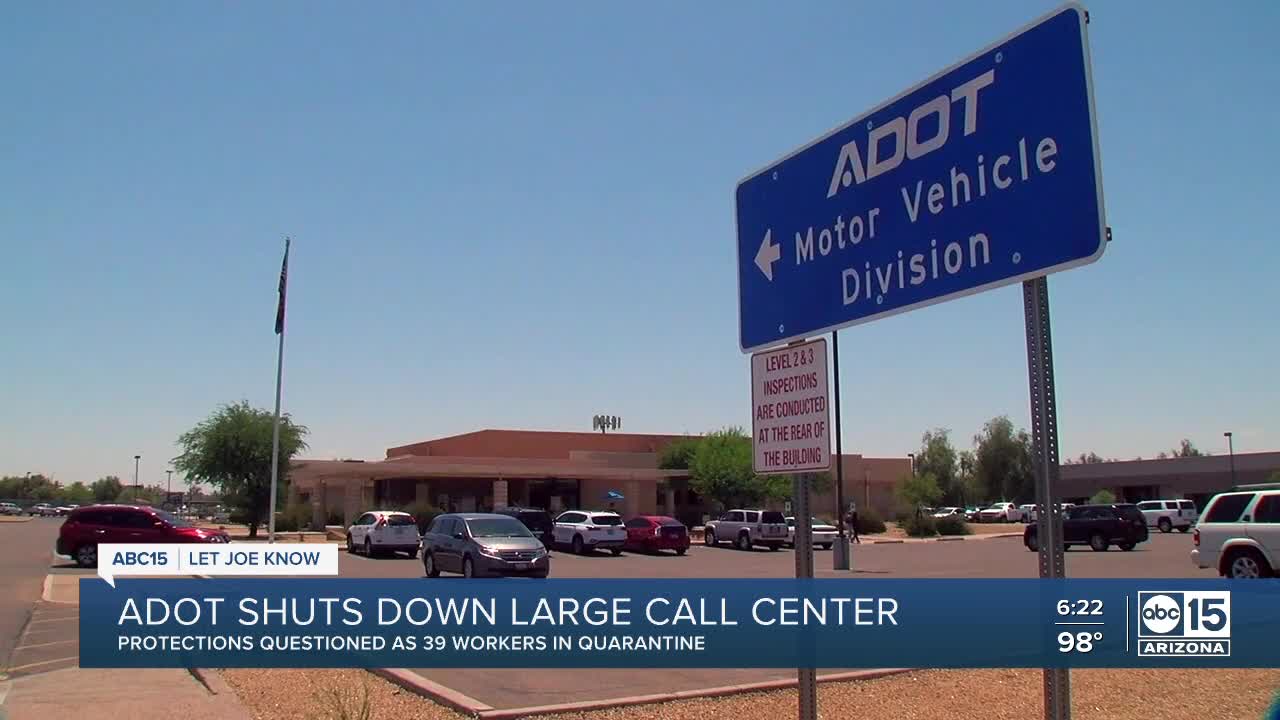 In an email sent to Arizonans by the Arizona Department of Transportation, we found out the MVD call center has had staffing shortages brought on by COVID-19.

Dozens of people are complaining about not getting car tags, license renewals, or any information through Arizona’s Motor Vehicle Division.

The Let Joe Know team has been hearing from many ABC15 viewers. They’re finding it’s a two-part problem involving glitches in a new computer system and staffing issues.

In an email sent to Arizonans by the Arizona Department of Transportation, we found out the MVD call center has had staffing shortages brought on by COVID-19.

Just recently, ADOT closed its level one call center at Perryville prison in Goodyear. The prison is where most initial calls to the MVD are handled by a team of 39 female prisoners who are part of a work program.

ADOT said calls, "normally handled at Perryville are of a general information nature and don’t involve the use of customer records."

Rebecca Dinning worked at the call center for the last three and a half years while she was a prisoner at the Perryville facility.

"If we can't help them on our level, then we route them to other places at ADOT," she explained.

Dinning was released from Perryville one month ago but says she has kept in touch with other MVD workers who are still there. In the last two weeks, Dinning claims these inmates told her some ADOT staff members at the call center tested positive for COVID-19.

"They had so many minutes to pack their things. They're moving over to the isolation yard," she said.

Dinning added that she was told the whole call center, all 39 prisoners, were also later quarantined and continue to be.

"They're over there right now locked down," she said.

That is when she said she stopped hearing from the inmates and, at this time, does not know if they have been tested for COVID-19.

In a statement to us, ADOT said, "on June 18, an ADOT staff member, who had earlier self-quarantined after feeling ill following a work shift, tested positive for the coronavirus. The center was immediately shut down and inmates who staff this center have been in quarantine since that time. None have shown any symptoms of illness."

ADOT added that earlier in June, another ADOT employee assigned to the call center who was caring for family at home, "tested positive for the coronavirus, but had not attended work at Perryville during this time."

While this has caused a delay in response times, ADOT said calls will be routed to other MVD centers.

However, people should not expect service to be any faster. We know of at least four other customer help centers that have also been closed because of staffing and COVID-19. Just last Friday, two of them in west Phoenix were still closed.

Why is ADOT having these COVID-19 staffing issues?

"ADOT employees have followed these procedures that include use of face coverings, temperature checks and answering health-related questions prior to entering a correctional facility."

But, Dinning said, "that is not correct."

According to her, the opposite is true at Perryville and she believes the call center shutdown could have been avoidable. While working there until late May, Dinning claims she never wore a mask there and inmates could not get one even though they asked for them.

"Absolutely not... they would not issue us masks," she said.

Also, Dinning says, the call center was set up with no social distancing.

Joe Ducey directly asked the Department of Corrections about a lack of inmate protections.

In an email response to Ducey, they said, "ADCRR maintains a vigilant posture with rigorous ongoing symptom checks across all of its state complexes including temperature checks for everyone entering facilities. Our priority remains ensuring the health and safety of inmates as well as all ADCRR employees and on-site third party partners. A department wide directive was issued on June 15, that face coverings are required for our staff as part of our ongoing work to mitigate the spread of COVID-19 within ADCRR complexes. We are examining the expansion of our inmate masking process. In the meantime, we continue to follow CDC guidelines for correctional institutions in providing face coverings to inmates as needed."

ADOT was also able to help the people we brought to their attention.