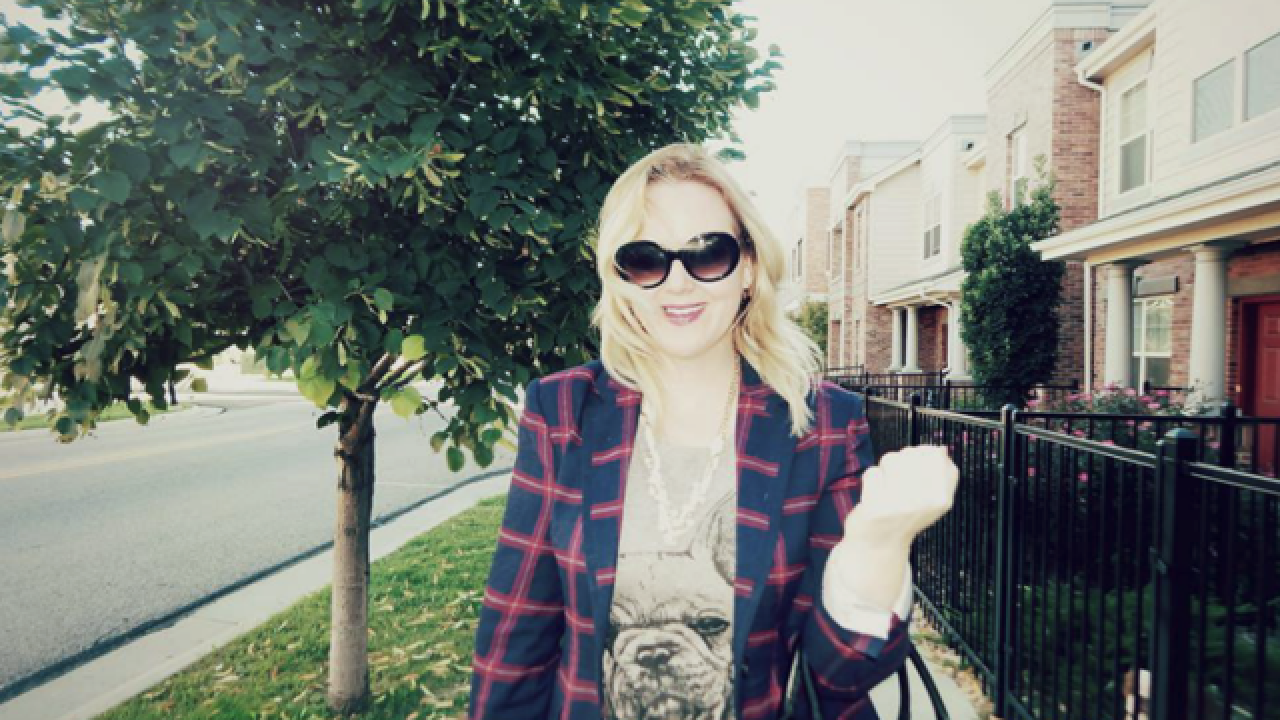 I was working as a newspaper reporter, earning $38,000 a year when I became dead set on purchasing my very first home. At the time, rent in my bachelorette pad had been going up every year, to the tune of $50 to $125 per month. Meanwhile, my dishwasher was a prop that didn’t actually work and my neighbors, from the sound of it, had turned their apartment into a bowling alley/tap dance studio. I actually was inspired to purchase my first home because I wasn’t sure how much longer I’d be able to afford renting. I knew my roots were settled here in Colorado, so it didn’t make much sense for me to continue to rent when I could be building equity in a home. And, I had started going to open houses on the weekends, fantasizing about what it would be like to have a place to call my own. (Here’s my dream come true, complete with my Boston Terrier dressed up as Santa Claus).

I set a goal to save up 20 percent. Translated, that’d be about $40,000 for a home in the $200,000 price range. As I was house shopping after the recession, I knew that large of a down payment would help buffer my income-to-debt ratio, avoid private mortgage insurance (PMI) and would also help my chances with bids in a competitive housing market and keep my monthly mortgage affordable. But, the math? 40,000 down payment > 38,000 salary. So, I started game-planning, and realized it would be a few years before I could afford to purchase my first home as a single lady (cue the Beyoncé music). Here’s 5 major ways that I saved up $40,000 for my down payment. (Quick note: The figures total more than $40,000, because during this same time period, I put a down payment on a new car, took some vacations to prevent burnout, adopted my dog and built up an emergency savings fund for him, and put money into savings to be able to purchase furniture and have an emergency savings fund for my home).

1. I got a second job as a bartender.

This was unavoidable. And, it required a lot of sacrifices. I spent many weekends behind the bar, instead of actually at the bar. I logged some 14-hour workdays, splitting my time between the newsroom and the bar. And, I even wore a visor as part of my uniform, which, to this day, I regard as a fashion sin. (Also, I turn red just thinking of singing “Happy Birthday" songs). I looked at cutting major expenses, but, I didn’t want to have a roommate and I couldn’t give up my car because I needed it to get to and from reporting assignments. I knew I needed to increase my income if I ever wanted to save up enough for a down payment (you can only trim your budget so much), but I didn't want to change careers because being a reporter was a lifelong dream. At the time, the gig economy of Uber-driving and dog-walking wasn’t a thing yet. So, I decided to bartend. Actually, I first started waiting tables because, as restaurant hierarchy dictates, that’s typically where you start out. But, on an average night, bartenders could make about double what servers did, and I figured if I were going to be there, I might as well get the biggest bang for my buck. I was strategic. I chose a restaurant over a traditional bar because it closed down at 10 on weeknights, allowing me to get home early enough to be able to get up for work the next day. I also picked a restaurant that was across the street from the convention center, because I figured that’d translate to a steady stream of business. My 9-to-5 job covered my bills—with not much left over. Bartending was my fun money (vacations, buying Christmas gifts, etc.), but most of it went straight into savings. Most years I owed taxes, so my bartending savings helped with that, too.

How much I saved: I typically walked with $150 a night, but paid anywhere between $10 to $20 a night to park downtown. Some weeks when there was a busy convention schedule, I worked five shifts. Other weeks, I worked one or two. I managed to make $55,000 bartending in roughly three years. It was a Friday night when I realized I had made enough money that it would tip me over the $40,000 mark that I had earmarked for my home in my savings account. As I turned in my register that night, I also put in my two-week notice.

2. I went without Internet.

As a full-time freelancer who works from home and rewards myself by streaming "The Mindy Project" on Hulu every night, I can’t ever imagine doing this now. But, at the time, it wasn’t too big of a deal to give up internet. I had a smartphone to scroll through social media feeds and stay caught up on e-mail, and if I needed to get some work done that required WiFi, I’d head up to a coffee shop. How much I saved: I had been paying $45 per month for Internet, so going without it for three years saved me $1,620.

3. I changed up my grocery shopping habits.

At the restaurant, as an employee perk, I could get 50 percent off meals. This was an OK deal for the salads and sandwiches which would cost me about $6 or $7, but a not-so-good deal for most menu items that were caloric bombshells and about $12 with my employee discount. I adopted a few strategies that helped me trim the fat on my grocery bill. I mostly shopped the perimeter of the grocery store, avoiding high-cost snacks. I also would roast a chicken at the beginning of the week and use it on salads, in burrito bowls and in wraps all week long. Instead of buying pricey cuts of meat, I started thinking of beans as a suitable protein. One of my favorite cheap dinners was a slow-cooked sweet potato (it caramelizes!) loaded with corn, black beans, avocado, peppers and sour cream. I’d also stuff bell peppers with Tex-Mex ingredients. And, instead of eating bacon or sausage with weekend breakfast, I’d load up on some frijoles! A few other grocery rules I followed religiously: Always go in with a list and stick to it; no buying magazines at the checkout line and meal plan around the weekly deal flyers. I’d also buy spices from the bulk bin if they weren’t ones I planned to use often. How much I saved: On average, my grocery bills had been about $115 a week. I cut them down to $65 and had less food waste. Over the course of three years, I saved $7,800.

4. Instead of going out for lunch, I’d invite friends on hikes.

#SundayFunday brunches, happy hours and lunch dates with friends help contribute to my happiness. While I didn’t go cold-turkey on going out for meals and drinks with friends, I did start finding new ways to socialize. I joined a basketball league with one friend, and a volleyball league with another. Instead of boozy brunches, I’d ask friends to join me on a hike or other types of adventures. I’d make dates with friends to walk our dogs or go to the farmer’s market together. I realized it was more about the conversation and less about the pancakes that had me looking forward to these get-togethers. How much I saved: I went from spending about $60 a week going out with friends to about $30. Over the course of three years, my savings were $4,680. https://www.instagram.com/p/BLuWyMLlZsU/?taken-by=brittanyanas33

When I was a kid, my mom would take me to the mall, and I could pick out the outfits that I loved. Then, she’d go to the fabric store and create a skirt that resembled the plaid ones that dominated Abercrombie & Fitch or a floral dress that was a near doppelganger of what was in the window display at the Gap. I took a similar approach to furnishing my house. I spent months perusing Pinterest, and wandering through home stores. Once I moved in, I was able to furnish my home with some cool finds from thrift stores and T.J. Maxx. An old record cabinet from a thrift store stashes toilet paper and cleaning supplies in my downstairs bathroom. How much I saved: I bought a $100 mirror at T.J. Maxx/Home Goods. I originally had been eyeing a similar statement mirror for $700. A vanity cost from Goodwill was $400, but I got it on a 50 percent off Saturday and it was $200; the one I was inspired by was $3,200 at a fancy-schmancy boutique furniture store. And, the record cabinet was $25 and had more personality than a $75 storage case I saw at a chain store. In total, I saved, $3,650 by shopping at thrift and discount stores.