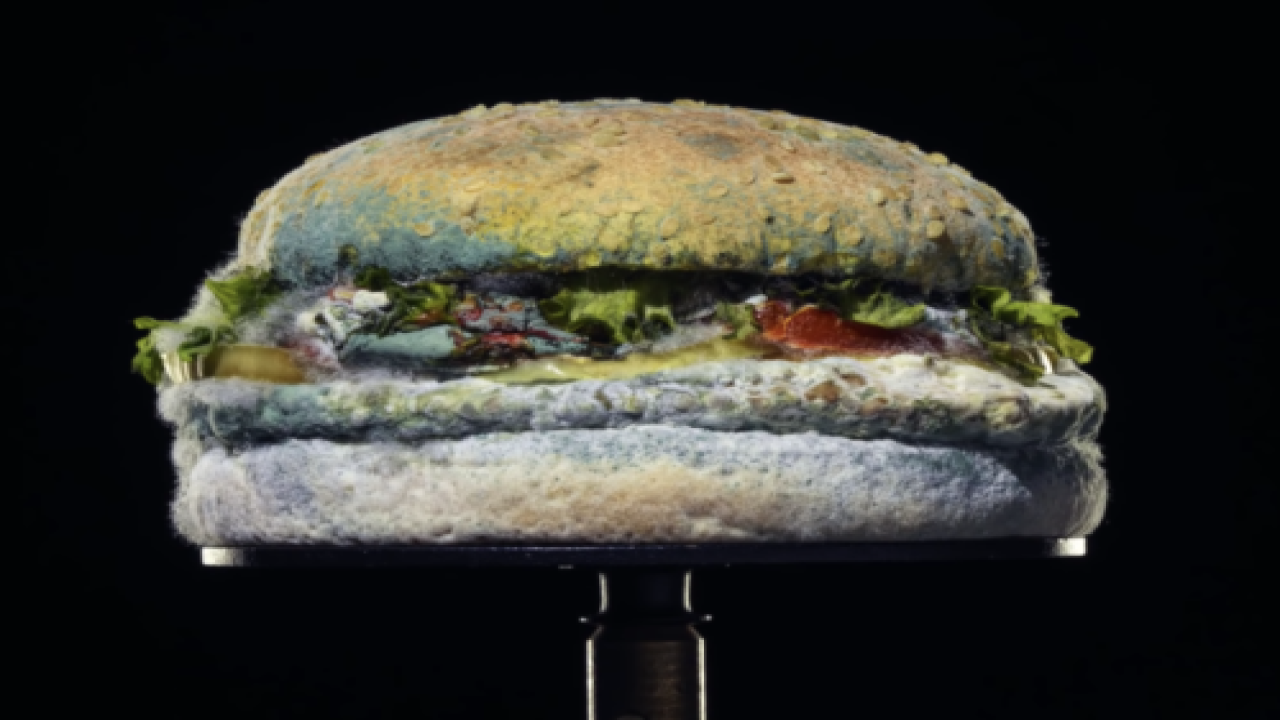 As consumers, we’re used to all the tricks advertisers use to make a burger look oh-so-scrumptious. Those TV commercials are designed to make us crave the salty, beefy goodness that you can only get at their restaurants — and more often than not, they work just fine!

But now, Burger King is banking on a wildly different style of ad to sell its new preservative-free Whopper, and the move reflects a trend in the fast-food industry toward foods that are socially conscious, fresh and natural.

The bold new TV ad from Burger King is titled, “The Moldy Whopper.” In this 45-second spot, you see what happens to a Whopper that is left untouched for 34 days, while the song, “What a Diff’rence a Day Makes,” plays. You watch as an aesthetically pleasing burger sinks in on itself and starts growing fuzzy green mold (ewww!). By the end of the clip, this burger does not look appetizing at all and you’re probably wondering why you just watched that.

Then the tagline appears: “The beauty of no artificial preservatives.”

Watch it for yourself below, if you dare.

Clearly, the brand is going to extremes to show the appeal of using natural ingredients far before its burgers ever hit the grill.

“The Burger King brand is currently rolling out the Whopper sandwich with no preservatives, colors or flavors from artificial sources in the U.S.,” said Christopher Finazzo, president Americas of Burger King, in a press release. “The product is already available in more than 400 restaurants in the country and will reach all restaurants throughout the year.”

Releasing an ad like this is a risk, for sure. Reactions to it on social media have been mixed so far. One Twitter post by @thediogocastro, for example, praised Burger King for its “fearless” approach to advertising.

what an amazing way to showcase your new product! Really smart and fearless. Things do rot naturally ð

Another Twitter user, @herpepperness, was undecided. “I can’t decide if this is brilliant or gross,” she wrote.

I can't decide if this is brilliant or like, gross.
Either way now I'm hungry.

But some people who responded had negative visceral responses to the commercial and were not impressed. Twitter user @birdoprey5 said he lost his appetite. “I was going to get [Burger King] for lunch,” he wrote. “I am earnestly not now because this made it look disgusting.”

I was going to get BK today for lunch, I am earnestly not now because this made it look disgusting. I just saw a whopper commercial on TV, now this undid that. Free advice- delete this tweet.

In some ways, the ad can be seen a response to a viral image of a McDonald’s burger that originally made the rounds in 2013. The burger had been stored since 1999, but looked and smelled relatively normal — probably thanks to preservatives used in its creation. There’s also a 10-year-old McDonald’s burger on display at a hostel in Iceland.

Burger King’s campaign is part of a fast-food chain trend showcasing more socially conscious foods that meet the needs of today’s enlightened consumers. This involves adding new methodologies that allow them to source foods more ethically and sustainably, but also focusing on freshness, as well as natural and quality ingredients.

This includes adding plant-based options, such as Burger King’s meat-free Impossible Whopper in 2019.

Other companies are doing similar things with some success. McDonald’s, for example, rolled out fresh (rather than frozen) beef in its Quarter Pounders in 2018, which resulted in a spike in sales. CNN Business reports that McDonald’s also stopped using certain preservatives in 2018, after removing antibiotics from its chicken supply chain in 2016.

Meanwhile, the burger chain Wendy’s says on its website, “Our fruits and veggies are from world-class suppliers; we say no to artificial ingredients, flavorings and preservatives whenever possible; and we use ingredients you’d find in your own fridge or pantry.” That chain just rolled out a new breakfast menu that Healthline called full of “sugar and fat bombs,” however. Those offerings include the Breakfast Baconator.

Does Burger King’s new ad make you want to eat its burgers, or does it turn you off?