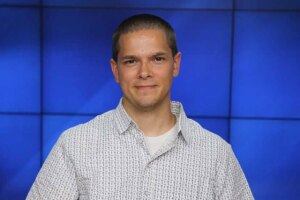 Sam comes to Arizona by way of Minneapolis, where he worked as a Digital Producer at WCCO-TV for several years.

Sam has also worked as a freelance radio reporter in Minnesota, with stories airing across the state and nationwide on NPR.

Before that, he worked in music programming at Sirius XM Satellite Radio.

In his spare time, Sam loves running, hiking and exploring the desert with his wife and 1-year-old daughter.