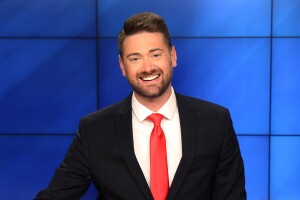 Mark Charter co-anchors Good Morning Tucson with Lydia Camarillo. He comes to Arizona from Bismarck, North Dakota, where he spent the last half-decade as an anchor, producer and reporter.

During his time in Bismarck, Mark and his news team earned an emmy nomination for their coverage of the Dakota Access Pipeline. You also can't forget about his three-year, runner-up title for "Best Male News Anchor Hair" in North Dakota (Yes, that's actually a thing).

Up until his move to Tucson, Mark lived in the Midwest. He grew up in Hibbing, Minnesota, went to college in Duluth, and finally made his way to North Dakota. So as you can imagine, he couldn't be happier to say goodbye to -30 degree winter days, and the parkas, hats and gloves that are required to survive that brutal cold.

Even though he is an Arizona first-timer, Mark has a special connection to the Tucson area. During World War II, his grandfather was stationed at Marana Air Force base, where he worked on and flew B-29 bombers.

When Mark isn't working, you can find him laying by the pool, Hiking Sabino Canyon, or searching for the best food and drinks in the city.

Mark is thrilled to bring you the news every weekday. Thanks for making Good Morning Tucson part of your day!