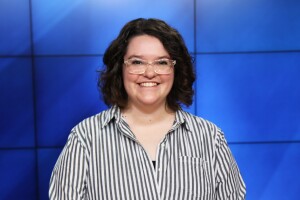 Lindsay Kerr joined the KGUN 9 team in September 2018 after moving to Tucson, the first time in her life where she hasn't lived with snow!

Born and raised in Alberta, Canada, Lindsay moved to Southeastern Idaho where she graduated with a Bachelor of Science in Broadcast Journalism at Brigham Young University - Idaho.

While in Idaho, Lindsay had the opportunity to field produce from the 2016 Democratic National Convention in Philadelphia and with NASA Scientists for the 2017 Total Solar Eclipse, as Idaho Falls was in the path of totality.

When she is not in the newsroom, Lindsay likes to read, play board games with her husband and soak up the Tucson sun all year long!