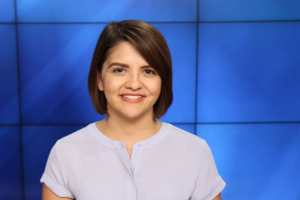 Jessica Duarte has been with KGUN9 since June 2019.

She is an Arizona native, originally from Phoenix, and graduated from Northern Arizona University in December 2018.

During her time at NAU, she majored in Creative Media and Film, with an emphasis on Media Production.

Over the next two years, she worked her way up from being a reporter to an anchor and producer.

While in her last semester, she served as a reporter, anchor, producer, and a Student News Director.

She was also taking a full load of classes, and working part-time to support herself.

As a reporter, she enjoyed covering the Democratic Watch Party solo, and putting together educational pieces for a segment called "Science Matters".

But producing is where her passion is at, and she's thankful for the opportunity to do so professionally.

When not working, she can be found at the movies, reading a good poetry book (or shopping for one), listening to TED talks, and laughing at sarcastic/darkly funny memes.